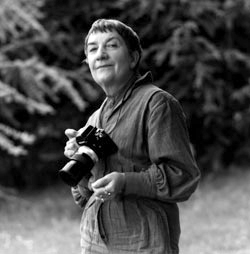 Born in Stuttgart in 1923 and raised in Esslingen, Walde Huth studied photography from 1940 to 1943 under Prof. Walter Hege at the School of Applied Art in Weimar. She worked until 1945 in the colour photography development department at Agfa/Wolfen, before she became a freelancer after the end of the Second World War with portrait, theatre and art photography.

By 1953 Walde Huth was already running a studio in Stuttgart with eight employees. Her work for Esslinger Wolle gave her the experience for her enormous success with creations by Christian Dior, Jacques Fath, Givenchy or Maggy Rouff: the world famous “New Look”.
From the 50s to the 80s the photographic protocol of the west German product worlds emerged in a consistently unmistakable orchestration, perfected procedures and rational implementation.

After Walde Huth closed the studio she had shared with her husband when he died in 1986, she focused once again intensively on realizing freelance themes.
Her images are featured in the collections of international museums around the world. Walde Huth passed away in the age of 88 in November 11, 2011. Graceful, style-conscious, with a sharp eye and wit, inspired and inspiring, Walde Huth remains one of the great intellects of German photography.

Walde Huth: “The essence of the image is to let something be seen.”

When talking with Walde Huth there is a specific constant that always appears in her work: it is that of one driven, who does not allow the rhythm of her work to be determined by rational logic or defined daily sequences, but rather by that which simply happens.

Aesthetics as a “science of sensual cognition” corresponds with what drives Walde Huth in all permanence. She follows neither reason nor a plan, but rather her eyes and that which adds itself, which appears to her in the course of the day.
Walde Huth developed a series of topics and image forms, which, according to this principle, appear, grow and oblige time and again over the years.

An important element in her work is the principle of finding; another is the arrangement in which the long observed mixes with surprising new finds. She goes on pilgrimages to a spot of colour on the asphalt, a piece of graffiti, a bushel of grass in the concrete, just as others make pilgrimages to Cologne Cathedral or the Pyramids.